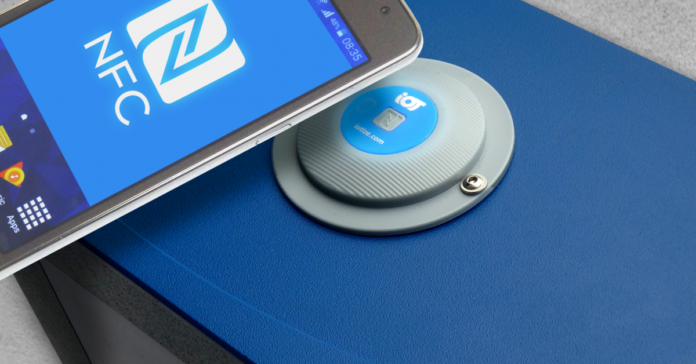 In our previous post, we looked at BLE (Bluetooth Low Energy) beacons. In this post, we’re focusing on Near Field Communication (NFC). NFC is most commonly used in the tap-to-pay function in bank cards, Samsung Pay, Google Pay and Apple Pay. NFC stretches much further than just as a means to easily pay for items. NFC in essence exchanges information with just a tap and can be used for digital location verification for field asset management. NFC is one of the many digital location verification technology options that form part of Bloodhound’s product and service offering, but what is it and how does it work?

As mentioned above, NFC stands for Near Field Communication which in layman's terms is a set of short-range wireless technologies requiring less than 20cm to function.

NFC tags generally consist of an antenna and a chip and are usually perceived as very affordable and ideal for digital verification applications. NFC can be divided into two classes namely, active and passive. Active NFC consists of at least one transmitting device as well as a receiving device. This would typically entail an active NFC tag transmitting signals to a receiving device such as a smartphone, tablet or laptop.

Passive NFC refers to an NFC tag that can only send but not receive signals. For asset and mobile workforce tracking, Bloodhound utilises low-cost passive NFC tags that are embedded inside each asset. It can be compared to a digital fingerprint reader where the passive NFC tag serves as the “fingerprint” carrying a unique ID. The NFC reader such as a smartphone or card payment device transmits a near field signal which reads the NFC tag’s unique ID.

Another practical use of NFC tagging is printer maintenance. Tags are commonly placed on an asset such as a printer. If a technician is assigned to regularly maintain the printer, NFC tags are used to implement an effective maintenance plan. This is done by activating the maintenance plan when the employee scans the NFC tag which means that the employee needs to be within 20cm of the tag to be able to proceed with the service. When an employee scans the tag, the unique ID is sent to the server capturing when, where, and which person was servicing the printer at the time.